Why Do Dogs Make Facial Expressions & How to Read Them

Most dog owners can agree: we all wish we could understand what our canine companion is thinking. Of course, dogs cannot speak to us and explain how they're feeling or what's going on in their minds.

However, just like we can understand other human beings by our facial expressions, we can try to figure out what our dogs are thinking by analyzing their expressions.

The Science Behind Facial Dog Expressions

First, let's acknowledge the scientific explanation as to why dogs make facial expressions.

The process of domestication for dogs affected both their anatomy and behavior. The canine facial muscle structure shifted throughout the process, specifically to communicate better with humans.

The muscle that controls the inner eyebrow has shown to be present in dogs, but not their wolf ancestors. Dogs have also been proven to move their eyebrows much more than wolves. The movement of their eyebrows imitates the expressions humans make when we're sad, which often leads to a comforting response.

Overall, we can conclude that the expressiveness of dogs' eyebrows is the outcome of selection. This selection is likely based on our preferences as humans. Those 'puppy dog eyes' aren't just a cute quality of your dog - it's a trait that has been passed on since the start of dogs' domestication.

What expressions do dogs make?

What do these expressions mean? 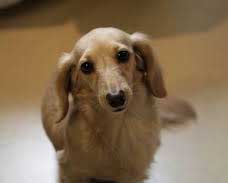 There are a few different types of direct eye contact that dogs may make. Soft eye contact typically appears confident, and is often accompanied by friendly tail wagging or body wiggling.

You may also notice dilation in the dog's eyes; the pupils may be small in bright light and large in dim light.

The look of a dog with soft eye contact is very different from a hard and direct stare. The dog will not appear to be friendly, and may have defensive body language. The body language can include a stiff wagging tail, a tall or forward posture, and little to no movement.

This can serve as a warning that the dog will bite if someone moves towards it.

Although these two forms of eye contact mean very different things, no eye contact has its own meaning. When a dog avoids eye contact, it's a sign of feeling threatened. This is a dog's way of saying that it will not challenge or confront you.

You may also wonder what a break in eye contact could mean. When an interaction between dogs turns aggressive, they may stare at each other until one breaks the eye contact. A fight may also follow that type of conflict.

When dogs interact with humans, however, a break in eye contact has a totally different meaning. It's a sign that your dog is comfortable with you, and does not feel threatened. 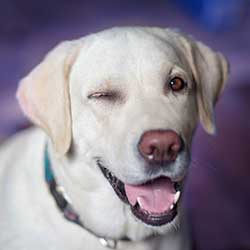 There are a few possible reasons why a dog may blink.

Blinking while making eye contact with a person usually means that the dog is wondering what you're thinking.

If you've just spoken towards the dog, it may know that you're talking to them and could be trying to figure out what you meant.

When a dog raises an eyebrow or even both, it's generally a sign of interest. This is especially true if it occurs while making eye contact with you.

Although most facial expressions that dogs make can be easily misinterpreted, a head tilt is just as it's usually perceived: it means that the dog is curious. 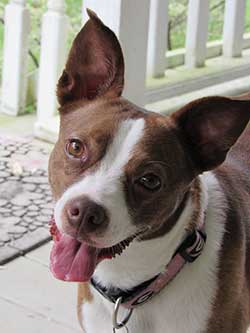 However, there can be other explanations for why your dog may be tilting its head. Poor balance can lead to head tilting as a way of staying leveled.

If you notice that your dog is having physical issues such as falling, nausea, or coordination difficulties, it may be a sign that there's more to that head tilt.

If you suspect that something may be wrong, of course it's always best to consult your veterinarian.

Another reason why your dog may be tilting its head is for better hearing, as it would help sound travel into your dog's ears.

This doesn't necessarily mean that your dog has a hearing problem, so there should be no reason to worry unless other symptoms are present.

A dog lowering or bowing its head is usually a gesture of submission to you, especially when eye contact is maintained. Although this may sound like fear, it's more of a dog's display of respect.

It's usually pretty easy to figure out when a dog is angry, uncomfortable, or afraid - because those emotions are usually shown through a snarl. 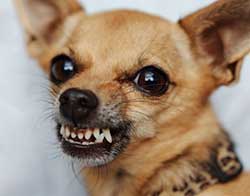 When you can see all or most of your dog's teeth, that's a sign that the dog is not happy.

Similarly, when a dog's muzzle wrinkles as the front teeth are shown, it should be taken as a sign of anger. These facial expressions are typically accompanied by growling.

* The dog may also pull its ears back, which can also be a sign of fear.

Related: How to Stop Puppy Biting

A person smiling is most often a sign of happiness or satisfaction, but it means something slightly different among dogs. 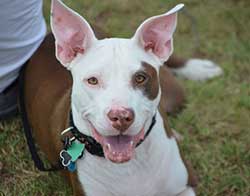 When dogs smile, it usually means they're excited. It can also be a sign of submission, but that is more common in interactions between dogs.

In interactions with humans, it's almost always a sign of excitement.

Some people actually believe that when dogs smile, they're trying to imitate human smiles. Although there is no scientific evidence to confirm this, it's easy to believe that our dogs would want to communicate by smiling right back at us!

It's clear that a dog's facial expressions may not be easy to understand immediately. However, after analyzing the movements in their face - combined with body language - it's often possible to figure out what your dog is feeling or thinking.

Although we may not be able to communicate with them as easily as we'd like, watching dogs' body language and expressions are great indicators of how they feel.

Also Read: How to Tell if Your Dog is Cold

Dog Suddenly Scared or Nervous of Something In House? 12 Possible Reasons

How to Potty Train a German Shepherd Puppy

Why do Dogs Hate Vacuums?

Why do Dogs Stretch all the Time?

How to Tell if Your Dog is Cold

How to Train a Golden Retriever Puppy…(13 tips & tricks)

Leaving a Puppy Alone at Home for the First Time: 22 Tips to Prevent Issues

Puppy Biting too Hard or Aggressively? Stop it Before it Gets Out of Control!

Puppy Crying in its Crate at Night! Will it Ever Stop?

Dog Suddenly Scared or Nervous of Something In House? 12 Possible Reasons
How to Potty Train a German Shepherd Puppy
Why do Dogs Hate Vacuums?
Why do Dogs Stretch all the Time?
How to Tell if Your Dog is Cold