How to Tell if a Border Collie is Purebred?

Pugs are one of the most identifiable breeds around! Thanks to their stocky bodies and distinct head shape, there's no mistaking a Pug for any other breed. That said, the most defining characteristic of the Pug is, without a doubt, its fantastic personality.

These dogs have flashed their puppy-dog eyes directly into the hearts of millions. Pair that with their constant presence in pop culture, and you have a truly unforgettable breed.

Whether you're already a Pug owner or you're thinking about adopting one to call your own, here are some fun facts about this iconic breed you need to know!

#1. Pugs Have a Long History

Did you know that Pugs date back to 400 BC? They're considered an ancient dog breed that originated in China. According to canine historians, this breed was highly revered among Tibetan monks.

Those who lived and worked at monasteries had a penchant for flat-faced dogs. Pugs were one of several similar breeds that monks raised.

These dogs were highly sought-after at the time. The only way to get one was to be gifted a dog by a monk! As a result, they were a rare commodity. This leads us to our next fact…

#2. They Were Originally Bred for Chinese Royalty

The original intent with Pugs was to create a royal companion. Chinese breeders sought out to develop an adaptable dog that could match the opulence and luxury of royalty.

Active and energetic dogs weren't the most dignified in the eyes of royalty, so the Pug was bred into existence.

All of the signature traits of this breed were carefully selected. They were destined to become lapdogs. Even the wrinkles on the face were intentional.

Breeders tried to create a pattern that resembled the Chinese character for "Prince." How's that for aesthetics?

#3. Pugs Have Royal Connections Throughout the World

The Pug's royal legacy didn't stop with Chinese dynasties. Throughout history, it's been a loyal companion to many major figures. One of the most notable is Empress Josephine Bonaparte, the first wife of Emperor Napoleon I.

According to legend, Josephine had such a strong connection to her Pug that it only slept in her bed. Upon getting in the bed with his new wife, the Pug allegedly bit Napoleon!

Pugs appeared in British royalty, too. Queen Elizabeth II was reportedly an adoring Pug lover before she met her first Corgi.

#4. The Pug was the Official Dog of the House of Orange

The Principality of Orange was a state in modern-day France. While it doesn't exist anymore, that doesn't mean that it's lost to history. Apparently, Pugs played a considerable part in the former feudal state's colorful past. 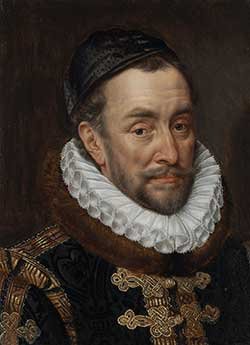 The story goes that William the Silent, the Prince of Orange, had a Pug named Pompey.

During the Eighty Years' War in 1572, he was sleeping in a tent while opposing Spanish assassins tried to sneak up for an attack.

However, Pompey went into a barking fit! This led to the capture of the attempted killers.

William the Silent went on to make Pompey the official dog of the House of Orange. A depiction of the Pug is even on his tomb!

#5. The Breed Inspired the Order of the Pug

Around 1740, Pugs inspired the name and practices of a secret religious organization. At that time, the Pope forbade any Catholics from joining the Freemasons.

So, a group of Catholics decided to form a secret society they dubbed "The Order of the Pugs."

According to legend, they chose the name because of the dog's loyalty and trustworthiness.

Many Pug-inspired acts occurred, too. For example, would-be members had to wear a collar, scratch at the door, and bark. They reportedly had to kiss the rear of a porcelain Pug figure as well!

#6. Pugs Go By Many Different Names

In most places, we know these dogs by the Pug moniker. However, this breed has worldwide acclaim. As a result, they go by several different names.

In China, they are "Lo-sze." For Spaniards, these pups go by the name of "Doguillo." Some in England call them the Chinese or Dutch Pug.

#7. A Group of Pugs is Called a Grumble

Here's something you probably didn't know! A group of three or more Pugs is called a "Grumble."

This term is thought to originate from the Dutch word for Pugs, "mopshond" Roughly translated to English, "mopshond" means "to grumble."

There's a reason why Pugs are so popular around the world. They make an appearance on several films and television shows. The captivation with Pugs started very early and continues even today.

Some of the most popular Pugs on the silver screen appeared in "Men in Black" and "The Adventures of Milo and Otis."

#9. The Name "Pugs" Comes from a Species of Monkeys

While there isn't much historical evidence to back this up, some believe that the name "Pugs" comes from a monkey! 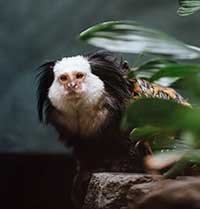 Marmoset monkeys were very popular in the 1700s. They created a signature face that many compare to the iconic "Pug face."

The similar facial expressions led to a natural transition in naming.

Another theory is that the name comes from the dog's resemblance to a fist.

Some think that the name "Pug" is a form of "Pungus," the Latin word for "fist."

#10. Pugs Can Have Many Different Colors

When most of us think of Pugs, we picture that signature yellowish-brown coat. Officially, it's called "Apricot-Fawn." However, these dogs are born with a few different colors.

To meet AKG standards, they can also be black or silver.

Selective breeding has also led to some more unique color morphs. Some examples include brindle, black and tan, and warm caramel.

Pugs are adorable and lovable regardless of their physical features. But according to AKG standards, a double curl on the tail is considered to be perfect!

Pugs belong to a unique class of canines. Along with the Pekingese, Affenpinscher, and more, Pugs are brachycephalic. That means that the snout is pushed in more than what you see with other dogs. 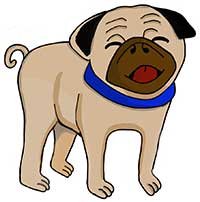 This trait is what gives these dogs their signature profile.

However, it does come at a cost. The smushed face does make it difficult for the Pug to breathe normally. It's a lifelong issue that becomes more apparent in challenging situations.

You might see these dogs struggling to breathe after long walks, intense bouts of activity, or whenever they're exposed to high temperatures.

Don't let that drive you away! Despite being brachycephalic, Pugs are generally pretty healthy.

Believe it or not, Pugs are pretty low maintenance! They're not nearly as demanding as other dog breeds. In fact, some would say that they're downright easy compared to some other famous canines.

Their brachycephalic nature makes intense physical activity out of the question. Pugs would much rather lounge around and have fun inside.

For this reason, they're a popular choice for the elderly, busy families, and anyone who doesn't have a ton of time for exercise.

Now, that doesn't mean that you can ignore their health! Pugs are still prone to weight gain and health problems. But when you compare the needs of a Pug to that of a Golden Retriever or Great Dane, these pups are a lot more manageable!

#14. They're Not Good Swimmers

We don't recommend trying to take a Pug on a swim. Most Pugs are notoriously bad swimmers. Remember: They have trouble breathing!

Chest-height water is fine. But don't expect a Pug to swim to safety if they happen to fall into a pool!

#15. Pugs are Bred for Companionship

Last but not least, Pugs are one of the best companion dogs you can get.

They were purposely bred to be easy-going, loving, and incredibly loyal. While the Pug has evolved a bit since it appeared thousands of years ago, those friend-focused traits remain!

These dogs are incredibly lovable and can become a fabulous furry friend for anyone!

There's no other breed like the Pug. These dogs truly are special and deserve a place in the canine history books! While they have their challenges, Pugs are perfect for those who want a ride-or-die companion and nothing else

Also Read: When Do Puppies Calm Down? Att What Age? 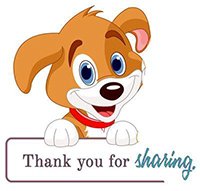 How to Tell if a Border Collie is Purebred?