Who doesn't love a good jerky treat? Chicken jerky is a popular snack for both dogs and humans! For dogs, jerky is a wholesome treat that's packed with protein. While you could easily buy a pack of jerky at your local pet store, you can save a lot of money by doing it yourself at home.

Why Make Chicken Jerky at Home?

The biggest reason why you should be making jerky at home is that you'll have greater control over what your pup is putting into their body. Let's face it, there's no guarantee of quality with commercial products.

While we can easily check to see if dry kibble has all the essentials for your furry friends, it's not the same with treats. Treats don't have any official nutritional guidelines like foods do.

As a result, manufacturers can get away with a lot!

Those simple-looking chicken chews could be made out of inferior ingredients. It's not uncommon for dog food manufacturers to utilize butcher leftovers to keep costs low.

This increases your risk of cross-contamination. Plus, there's the issue of hormones and additives to worry about.

By making your dog's chicken chews at home, there's no question about quality. As long as you're sourcing the chicken from a trusted butcher, you'll know everything you need to about the jerky.

This includes what's in it, when it was made, and how it was prepared. You're doing it all yourself after all!

How is Jerky Made? 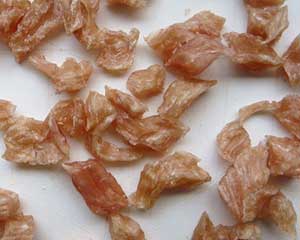 Before we get into the recipe, let's talk a bit about how jerky is made in the first place.

Contrary to popular belief, jerky isn't cooked in the traditional sense. It is heated up in an oven to sanitize the meat and kill off any bacteria.

However, jerky gets its iconic texture through the process of dehydration!

Dehydration pulls out all of the moisture from the chicken. This leaves behind chewy flesh without all of the fat, oils, and high water content. It's a lengthy process. But, it's well worth the wait.

You can use an oven on a low heat setting to dehydrate the chicken. However, a dedicated dehydrator is preferred.

The process takes several hours. A dehydrator uses less power and is designed to complete these kinds of jobs. The finished product is healthy and naturally preserved.

You don't have to worry about storing the jerky in the fridge to keep it in good shape. But we'll get into that a bit later. For now, let's dive into the recipe!

This is a pretty simple recipe that doesn't call for any complicated ingredients. You can prepare the meat beforehand to give it a boost of flavor. We'll go over the ingredients and instructions for that soon.

To create a simple chicken jerky with nothing fancy, all you'll need is a pound of lean chicken meat. Preferably, this will come from breast meat. Make sure to cut off any fat trimmings and remove all bones.

In addition to the chicken meat, you'll need a small amount of olive oil to prevent sticking. 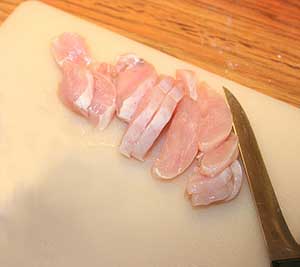 To prepare the meat, all you have to do is cut it into thin strips. Strips should be between 1/8 and 1/4 of an inch thick.

The physical shape of the chicken strips doesn't matter. It's going to shrink anyway!

Once your chicken is chopped into thin strips, place it on a wire cooking rack or baking sheet.

Make sure that you're greasing the cooking surface with olive oil first to prevent sticking.

Place each strip with about a quarter-inch of space in between.

As we mentioned earlier, there are a couple of ways to dehydrate your jerky. You can use your oven or a dehydrator.

To use an oven, preheat it to the lowest setting possible. For some models, this is about 200 degrees Fahrenheit. Some won't even go below 250 degrees.

Whatever the case may be for your appliance, let the oven heat up to that lowest setting before popping the jerky in.

Let the jerky strips cook for about two hours. After the two-hour mark, check to see how they are doing. Thinner strips will be done faster, so the exact time it will take depends on how you cut the meat.

The goal is to dry out the strips completely. If they're not done after two hours, don't fret. Just flip them over and give them more time! Keep a watchful eye and check on the jerky strips every half hour or so until they're evenly dried.

Using a dehydrator is much easier. Place the strips of meat evenly on the included dehydrator trays. Again, leave about a quarter of an inch of space between the slices.

Preheat the dehydrator to 160 degrees Fahrenheit. Then, set your timer for four hours.

After four hours, check to see if they are dried! You may need to leave the jerky in the dehydrator for a little while longer. Again, just play it by ear and check the texture. You'll know when they are done.

Whether you cooked in the oven or a dehydrator, give your dog's jerky treats some time to cool off completely. Then, put them in an airtight bag or container.

Because most of the moisture is removed, the jerky is shelf-stable for about two weeks. Some owners still like to keep the treats in the refrigerator, but it's not necessary. Just make sure that your dog eats all the chicken jerky before two weeks and everything should be fine!

If you want to give the chicken an added boost of flavor, you can marinate the chicken before dehydrating. By adding some marinade, you can make those jerky treats more appetizing for picky pups. Plus, they'll be delicious for humans!

For the marinade, you'll need:

Mix all of those ingredients up and add your sliced chicken meat. Put the marinade and the meat in a sealed container and pop it in the fridge. You can refrigerate the meat for four to 24 hours. The longer you let the meat marinade, the stronger the flavor will be.

Before you dehydrate the chicken, make sure to strain the meat and pat off any excess liquids.

There you have it! Making homemade chicken jerky for your precious pup couldn't be simpler. Even if you don't have a dehydrator, you can get the job done in your oven. This recipe is a healthy snack that's filled with essential protein. Your dog will love it!

Why is my Puppy Always Hungry? Crush the Cravings ..

How Much Raw Food to Feed a Puppy? Schedule Based on Age & Weight