Why do Dogs Stretch all the Time?

Have you never noticed how often your dog stretches? There's a good chance that they do it a lot. It's common for pups to work their muscles every time they wake up from a nap or after they have spent a lot of time on the ground.

They may extend their rear legs or put their front legs far out in front of them,

For the most part, stretching is a completely harmless act. Dogs need to work their muscles just like humans do. However, there are some instances in which stretching is connected to a specific issue or feeling.

While most dog lovers don't give these types of actions a second thought, it's good to understand what those movements actually mean.

So your dog wakes up from a nap and immediately goes into a full-body lunge. What exactly does that mean? Generally, it's your dog's way of prepping their body for whatever they plan to do next. It's a natural instinct that has been with dogs since before domestication.

When dogs had to hunt and fight to survive, their bodies had to be in tip-top shape. Canines knew that if they didn't adequately prepare for intense physical activity, there would be serious consequences.

Back in those days, losing a fight or failing to knab some prey increased the chances of death for the entire pack.

So, wild canines would stretch regularly to warm up the muscles and get the blood flowing. It's the same reason why you see athletes doing a ton of exercises before a big run.

Stretching helps your dog perform at their very best. The process contracts and lengthens the muscles, reducing the chances of injury.

While domesticated dogs don't have to worry about fighting for survival anymore, that mentality still remains.

You may notice your dog stretching after they have been sedentary for a long period of time.

They may even do it while you're gathering gear for their walk to get ready.

Stretching is also a way for dogs to communicate with humans and other canines. Many pups will greet their owners at the door with their front legs extended and their butts in the air. Most people assume that their dog just waking up from a nap.

However, this type of stretch is a common greeting. It's usually accompanied by energetic eyes, relaxed ears, and a wagging tail.

Essentially, they're just trying to tell you that they respect you and want to play. You can see this behavior with other friendly dogs as well. If your dog meets another pup that they don't want to dominate or submit to, they may perform the stretch.

It shows mutual respect and a willingness to play.

While the greeting stretch is friendly, other types of muscle-prepping exercises may lead to something else entirely. It could be used to express sexual interest. This is especially true if you have a male dog that's around a female in heat.

In the worst-case scenario, it could mean that your dog is ready to attack. Remember how we said that dogs use stretching to prepare for action? This also applies to lunges and attacks, so be careful and learn to look out for signs of aggression.

Like humans, dogs will use stretching to alleviate bodily pains. However, unlike humans, they're not capable of expressing their pains verbally. Watch how your dog stretches. If they appear to be having difficulties, there may be some underlying medical condition that's causing discomfort.

There are many health issues that could affect your pup. If your dog suffers from arthritis, tendonitis, or other joint issues, they may use stretching to provide temporary relief. Some dogs also do it to stretch out their back, which could indicate spinal issues.

Internal problems may be causing pain as well. Dogs with pancreatitis often stretch out their stomach in an attempt to get some relief. With this condition, digestive enzymes are capable of causing tissue damage and putting pressure on other organs.

Look out for additional symptoms that may be accompanying the stretching. If your pup is also vomiting or showing signs of a fever, get them to a vet as soon as possible.

If you don't know what splooting is, we highly recommend that you do a quick image search to familiarize yourself. This unique position is both adorable and very awkward-looking.

While it's commonly associated with Corgis and small puppies, any dog can do it. Most people think that splooting is a weird personality quirk. In reality, it's just another stretch. 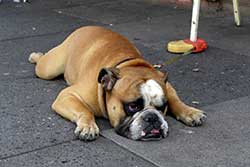 When your dog sploots, they place their belly on the ground and stretch their rear legs back behind the body.

The front legs may also be stretched back, making it look like your dog is sliding forward.

It's a weird body position, especially when we're so used to seeing the rear legs of a dog being bent most of the time.

Splooting has a couple of benefits. One, it stretches out the hips. This can provide greater mobility during physical activity. Secondly, it's relaxing. All of your pup's limbs are stretched out and comfortable. Many dogs even fall asleep if they stay in the position for too long.

Finally, splooting helps dogs cool down. It's often performed on tile floors so that dogs can expose their bellies to the cool temperature.

Should Stretching Be Encouraged?

As long as no harm is being done, stretching should absolutely be encouraged. Whenever you catch your dog doing a good stretch, feel free to praise them. Give them a reward or some good belly rubs.

Stretching provides your dog with nothing but benefits. It makes their muscles less prone to injury, releases toxins, and helps them relax. As long as they're not using it to prepare for an act of aggression, there's no harm or foul.

To sum up, stretching serves many different purposes for dogs. In most cases, it's simply a way to make their bodies more agile and ready for activity. It's also used as a way to communicate respect. Pay attention when you see your dog performing their daily stretches.

If you notice any signs of pain or discomfort, consult with your vet to address the root cause. Beyond that, let your dog do continue on with their healthy stretching habits.

Also Read: How to Tell if your Pup is Cold

Are German Shepherds Good with Cats?

Why Do Dogs Pant In The Car? 6 Possible Causes & Solutions

At What Age Do Puppies Calm Down?

How to Stop My Dog from Barking When Walking Outside?

Can Pugs Swim? Should you be Worried?

Dog Suddenly Scared or Nervous of Something In House? 12 Possible Reasons

How to Potty Train a German Shepherd Puppy

Why do Dogs Hate Vacuums?

Why Do Dogs Make Facial Expressions & How to Read Them

How to Tell if Your Dog is Cold

How to Train a Golden Retriever Puppy…(13 tips & tricks)

Leaving a Puppy Alone at Home for the First Time: 22 Tips to Prevent Issues

Puppy Biting too Hard or Aggressively? Stop it Before it Gets Out of Control!

Puppy Crying in its Crate at Night! Will it Ever Stop?

Are German Shepherds Good with Cats?
Puppy’s First Bath: Step by Step Guide to Bathing Your Pup
Why Do Dogs Pant In The Car? 6 Possible Causes & Solutions
At What Age Do Puppies Calm Down?
How to Stop My Dog from Barking When Walking Outside?